Home » News » Dr. Foad Nahai is the new President of the ASAPS

Dr. Foad Nahai is the new President of the ASAPS 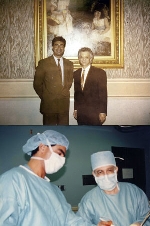 The plastic surgeon Foad Nahai was appointed as the new President of the American Society for Aesthetic Plastic Surgery (ASAPS), during the Annual Congress celebrated in New York, in April 2007.

The organization is constituted by 2400 certified plastic surgeons, specialized in cosmetic surgery.

Dr. Foad Nahai is at the moment the Director of the American Board of Plastic Surgery. Graduated from the University of Bristol, England as a physician, he carried out his residency in General Surgery at John Hopkins Hospital. He specialized and developed his career as a plastic surgeon and professor for years at Emory Univesity, Atlanta, Georgia.

Dr. Pol had the opportunity to complete his professional training in plastic surgery at Emory University in 1992-93, close to doctors like Foad Nahai, John Bostwick III and Roderick Hester, Jr; in occasion of being selected as a scholarship holder by the Rotary International´s Rotarian Foundation.